An innovative high fidelity VR-based immersive, interactive and intelligent simulation based onboarding training program was developed. The program was pilot tested to evaluate ROI and found to deliver excellent outcomes. The program was then deployed into production, and is serving as a model for other plants in other states in the US.

The Challenge: Inefficiencies in the legacy training program

The fairly recent multi-million dollar factory expansion required a rapid growth in employee count. The target was to hire at least ten employees per month for the next few years. The fiber production process involves two steps: 1) string-up task by human worker, followed by 2) automated spool production by the machine. In the string up step, the worker winds and loops the textile fiber around multiple spindles on the machine in a precise manner. Both the task-duration and accuracy are important. High duration results in high waste of raw materials. Poor accuracy results in fiber breaking, which also results in wasted raw materials and production delays.

The standard training practice within the Industry was focused on job instruction and job relations. There were expert trainers designated for each new employee. The instructions provided to the new employees were in the form of job breakdown sheets and videos.

An average training time from onboarding to completion of training in the “string up” process was 4 weeks. The proficiency of an employee is measured by “string up time”. It is the time taken by a worker to complete the string up, after which the machine takes over. Typically, a new (novice) employee’s string up time is in the 25-30 minute range, while an expert employee’s string up time is 4-5 minutes. This represents an enormous skill gap. The challenges for personal training on the factory floor are compounded because of several factors including, ambient noise, restricted space and rapid speed of the task.

The constant high level of noise on the factory floor made it difficult for the trainees to listen to the instructions. It was also quite hard to observe the trainer’s demonstration of the task. Moreover, the trainer, being an expert, would perform the task rapidly in 4-5 minutes, which gave little opportunities to pause and describe the steps while performing the demonstration. Therefore, the knowledge transfer was a key limiting factor, which stretched the training period to 4 weeks.

Additionally, the bulky tools required to perform the tasks promote fatigue. Therefore, this limits the number of times a trainee can practice a designated task. Moreover, the production process in the factory is continuous, so the good product gets wasted while an employee is being trained. The cost of product wastage during 3 weeks of training on the production floor alone was estimated to be $32,000 per month.

The project team began the design process by reviewing the state of the art in VR/AR hardware. The review included Augmented/Mixed Reality devices such as Hololens, Epson Moverio and Magic Leap, as well as Virtual Reality devices such as HTC Vive and Oculus Quest. AR/MR devices could provide instructions as needed in a text, graphic or photo format and were inexpensive, but they required WIFI and could not support the formation of muscle memory. Most importantly, AR/MR approach would require training with real equipment which would not address raw materials waste and safety risks. Virtual Reality training offered the benefit of offline training with actual tools in hand, development of muscle memory, no waste, safety, and proficiency gains while away from the production line. HTC Vive was selected over oculus Quest because it offered trackers that could be attached to the actual tool for high fidelity tracking.

After finalizing the hardware task, the team progressed to the learning design. As the task involved psychomotor and cognitive skills, the project team set out to design a high fidelity 3D, interactive simulation of the task. The design goal was to immerse the worker in a simulation environment that was practically indistinguishable from the real factory floor. To this end, realistic 3D models (digital twins) of the factory floor, machine and the string up process were created. This required careful attention to 3D modeling, lighting, materials, textures and shading. In the case of the machine, realistic animations were included. The simulation of the textile fiber and its interaction with the machine parts posed specific challenges. The project team included engineers with expertise in modeling and simulation of elastic continua (ropes, belts, threads etc.) and this was important for creating high fidelity simulation that was both accurate and fast (high frame rate).

To maximize fidelity, the team decided to use Vive trackers attached to the actual tool, instead of using VR controllers, so that the workers could feel the weight and moment of inertia of the actual tool during training, and develop accurate “muscle-memory”.

Once a high fidelity simulation was ready, task specific instructions were overlaid based on instructional design principles. Both audio and visual prompts were included, along with narration. Telemetry was implemented to collect performance data. Task appropriate feedback was incorporated to facilitate learning. Gamification was added to give performance feedback to the worker in the form of quantity of raw materials wasted and leaderboard.

SimInsights team traveled to the client facility in South Carolina and helped the client select computer hardware, order it from Lenovo, as well as set it up in a dedicated VR training room. The team also helped install all VR software and hardware and complete the set up for training purposes.

After the set up, the client was able to incorporate the VR training module as part of their regular training program. SimInsights team assisted with technical support as needed, to help the program run smoothly.

Two visits by SimInsights team helped train client representatives in demonstration of the system to key stakeholders from the plant as well as other neighboring offices to get initial feedback. These meetings generated strong enthusiasm and support for implementation. The solution developed by SimInsights was very robust, easy to manage and required negligible support after deployment. Subsequently, the client was able to regularly use and maintain the system, reaching out to SimInsights in case of any issues, which were infrequent and easily resolved. 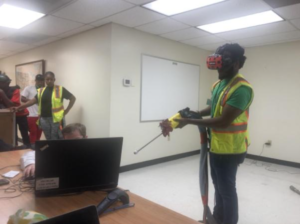 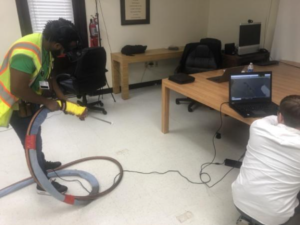 The data shows that there is a substantial improvement in all of the measured KPIs. This was also apparent from the significant improvement in the learner engagement survey. As new employees could asynchronously  and repeatedly practice their tasks at their own pace, that too in a low-risk immersive environment, they started taking more ownership of their learning process. When a trainee made mistakes in the VR simulation s/he did not have to feel guilty about it. Actually, the learners were never discouraged from making mistakes in the simulation environment. It is all a part of the learning process. The new employees felt the gratitude that the company was investing so much for their success. It was observed that the majority of the trainees got intrinsically motivated because of the above mentioned factors. Hence, there was a sharp improvement in all the target KPIs. 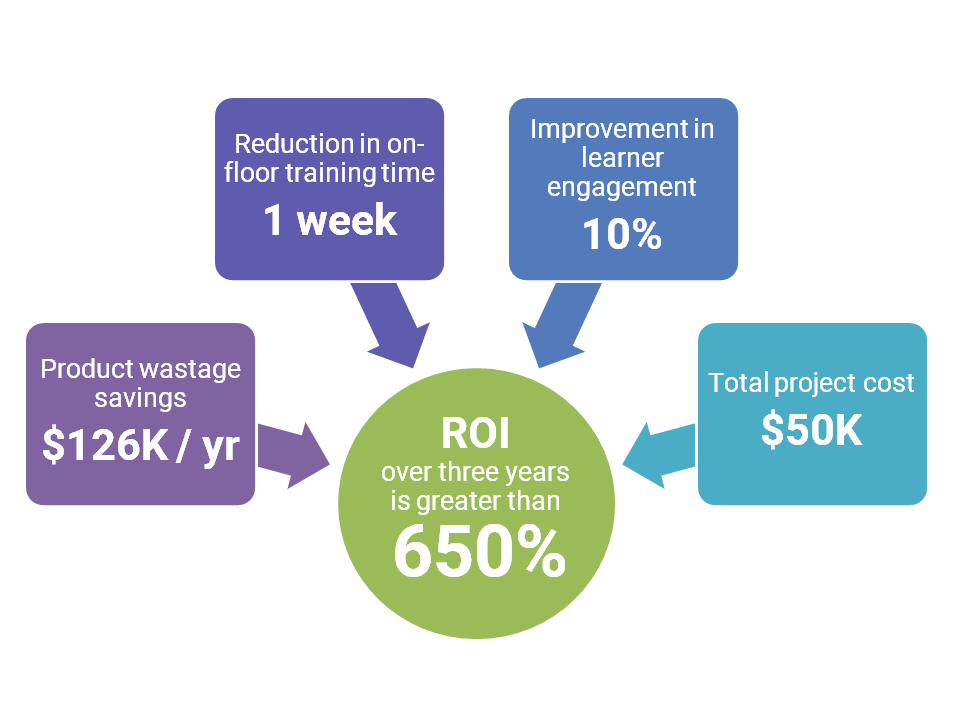 The fact that the training was mainly done in VR simulations, away from the factory floor, allowed normal production to run without any significant interruptions. The VR training was being conducted off the production floor, which saved almost all of the $126K annually in product wastage costs attributed to the employee training. In addition, the new process was much more scalable, as reliance on the availability of expert trainers was enormously reduced. Learners could practice their tasks without hand-holding of supervision by the experienced employees.

Moreover, the gamification of the simulation tasks made the training more fun and exciting. There has been a huge amount of enthusiasm and engagement, which makes them eager for the next opportunity to put on the VR headset and practice their tasks again and again. Their repeated simulation experience quickly developed their muscle memory for all the tasks involved.

Considering just the savings from reduced product wastage ($126K) and comparing it with the cost of authoring and deploying the training content ($50K), we get a three-year ROI of more than 650%. The payback period is only 19 weeks.

The immersive training simulation developed by SimInsights also received great feedback from the learners. Some of their comments were:

The trainees’ level of enthusiasm and engagement about the immersive VR training content and the training process was very high. SimInsignts took a traditional high-risk and costly training process and turned it upside down. The gamification engine created a training environment that was exciting and risk-free for the learners. The safe learning environment allowed the learners to experiment with their techniques, without the fear of causing massive product wastages. The repeated simulations enabled the trainees to rapidly develop muscle memory for all the tasks involved in the string up process. This improved their intrinsic motivation and enabled them to become as proficient as an expert within about nine days.

The success of the onboarding program enabled Shaw Industries Group, Inc to manage multi-million dollar South Carolina factory expansion with aggressive growth in employee count. This success story at the South Carolina factory was shared across other divisions of the Shaw Industries Group. As a direct result of the grand success, other such process innovation opportunities were identified. The process of developing employee training content using SimInsight’s VR simulations has already been launched at Shaw’s Decatur, Tennessee factory; where similar challenges exist. In the future, a broader collection of such simulations could help transform employee training and upskilling throughout the company.

Request a call
We use cookies on our website to give you the most relevant experience by remembering your preferences and repeat visits. By clicking “Accept All”, you consent to the use of ALL the cookies. However, you may visit "Cookie Settings" to provide a controlled consent.
Accept All Cookie Settings
Manage consent

This website uses cookies to improve your experience while you navigate through the website. Opting out of some of these cookies may affect your browsing experience.
Necessary Always Enabled
Necessary cookies are absolutely essential for the website to function properly. These cookies ensure basic functionalities and security features of the website, anonymously.
Functional
Functional cookies help to perform certain functionalities like sharing the content of the website on social media platforms, collect feedbacks, and other third-party features.
Performance
Performance cookies are used to understand and analyze the key performance indexes of the website which helps in delivering a better user experience for the visitors.
Analytics
Analytical cookies are used to understand how visitors interact with the website. These cookies help provide information on metrics the number of visitors, bounce rate, traffic source, etc.
Advertisement
Advertisement cookies are used to provide visitors with relevant ads and marketing campaigns. These cookies track visitors across websites and collect information to provide customized ads.
Others
Other uncategorized cookies are those that are being analyzed and have not been classified into a category as yet.
SAVE & ACCEPT